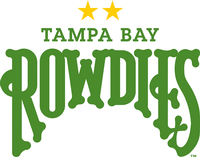 The Rowdies are Tampa Bay’s professional soccer team and a member of the United Soccer League. The team plays its games in downtown St. Petersburg at Al Lang Stadium.
The Rowdies were the first professional sports franchise in the area and remain one of the most recognizable and well-loved brands in soccer. Originally established in 1975, the team won the NASL Soccer Bowl championship in its inaugural year and created a unique, entertaining and memorable franchise with the Fannies, Wowdies and unforgettable “Kick in the Grass” theme song. In 2008, a group of investors announced the purchase of rights to a professional soccer franchise and the newly established team began play in 2010. In 2012, the Rowdies won the NASL Soccer Bowl Championship after a thrilling shoot-out victory in front of a sold out crowd at Al Lang Stadium in downtown St. Petersburg.