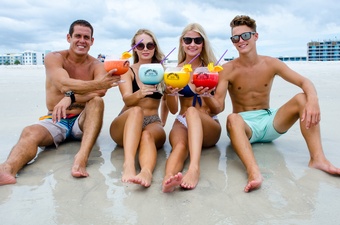 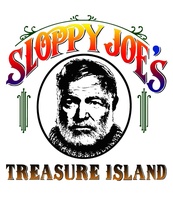 Florida?s legendary tradition continues with our 11,000 square foot restaurant and bar right on the beach of Treasure Island, Florida.

Sloppy Joe's Treasure Island is located directly on the white sandy beach of Treasure Island, Florida and has spectacular outdoor decks from which you can watch the nightly sunset. The menu features a variety of sandwiches, salads and pasta dishes. We offer a great menu at very affordable prices. Entrees start at $5.95

Our History
The famous and infamous Key West saloon that is our name sake opened December 5, 1933?the day Prohibition was repealed. Key West being a bastion of free thinkers even in the thirties, Prohibition was looked on as an amusing exercise dreamed up by the government?and Joe Russell was just one of the enterprising individuals who operated illegal speakeasies. Even Ernest Hemingway, who made Key West his home at the time, slipped over to Russell?s on occasion to buy illicit bottles of Scotch, and the two struck up an enduring friendship.

It was Hemingway, a favorite patron of Russell?s bar from the start, who encouraged its name change to Sloppy Joe?s. The new name was adopted from Jose Garcia Rio Havana club selling liquor and iced seafood. Because the floor was always wet with melted ice, his patrons taunted this Spanish Joe with running a sloppy place? and the name stuck.*
At Sloppy Joe?s on the Beach the menu includes American Caribbean entrées with bar favorites such as burgers, seafood, sandwiches and salads. Its offerings are consistently top-quality, consistently satisfying, and just like Key West there are occasional changes, but the tradition of good food and a place to gather with good friends always remains.